“Thank you very much. It’s a real honour for me to have been invited to say a few words, to spend a little bit of time with you all, it’s good to see all your faces. Lots of people in this group are people I worked with for a long time and I’m really sad to hear about Nick’s loss. (the passing of WSANEC Elder Lou Claxton). Mavis is absolutely right. I hope that it’s a big message to us and the importance of our work in sustaining the knowledge of the old people, the people who really had those relationships and connections to the earth.

I’m really happy to hear that you [Mavis] are working on changing the curriculum and what people are learning. Most of you who know me, know that that’s been a real big effort of mine. I’ve achieved some, but there’s still a lot to go. When Maeve invited me she wanted me to mention the books that Gloria Snively and I published a few years ago called Knowing Home. They came to be when I was director of Indigenous Education for the Ministry and I had the privilege of having access to what Indigenous students were graduating with in the province. The numbers were very alarming in that there were so few Indigenous students who were graduating with any study in the sciences. A limitation that would keep them from going into the fields that were necessary for the upkeep of our communities and our people. When you look at what students wanted to study, could study, or felt that they could learn, it wasn’t in the sciences because that world was not part of our world. And I thought, what do we need to do to change this? Then, finally, I had a textbook on social studies [that included Indigenous peoples history]. It took us educators forty years of working to make that happen. Forty years. Students in British Columbia knew nothing about the Indigenous peoples of this land. Nothing, unless they went and studied it on their own and found a way to learn. They were not going to get it through education. They were not going to get it through what was designed for them to learn in school. In working with that group, the real champions of Indigenous knowledge, I’ve had the privilege of learning from them, of being sustained by them. And it took forty years. Finally, there was a textbook. That textbook, even though it’s nothing that great, caused such an upheaval in the political world and in education. Now, 20 years later, it’s accepted. It didn’t take that long to get our knowledge included in the literature.

But, beginning with science was very challenging because there was a belief that there is no such thing as Indigenous knowledge in the sciences. I watched people struggle to understand this. So, when I was still at the Ministry I called Gloria Snively, because she was my teacher when I was learning to be a teacher, to try to find a way to begin to have Indigenous knowledge spoken about in that world. We came up with the idea of offering a Master’s program. In this program there were Indigenous people and there were non-Indigenous people who were very interested in Indigenous knowledge. The result of those student’s work were those two books. I know the only way that we’re going to change people’s thinking and ideas about what to include in the knowledge systems, in what we study in the sciences, is if we provide opportunities and make spaces and open doors to Indigenous people’s knowledge. Who is best to do this work but our people. That’s why it’s important that our people are involved. I’m just so proud of the people who persisted and had their Master’s work published in this volume. We had a challenge of finding a publisher because of the idea that there is no such thing as Indigenous knowledge in science. We had a challenge because the students whose work we were publishing, in their research, were Master’s students. We ended up publishing it on our own and thank goodness for the University of Victoria who supported us as without them those books would not have found their way into being. Again, I want to thank all the people who worked on this. I tell you this story so that you know how important your work is.

Another story that I want to tell you is when I first came to the University of Victoria in 2004, thanks to Budd who was Dean of Education at the time, and really invited me to apply to a position at the University. One of the projects that I learned about that was so inspiring and that I know continues to inspire me, was a project where people in WSANEC territory brought together a group of young people, young people who had dropped out of school, who had been kicked out of school because it was thought they couldn’t learn. They were rejected by the school system. What the people in WSANEC did was they brought them together to work on a project to restore a spawning creek that had almost dried up because of what society had done to it. It was so filthy and clogged. They restored this creek and now it’s a working creek again. They not only restored and cleaned up the water and restored the creek, they learned about and restored all the plants to regrow so that it would sustain that creek and those spawning fish. Not only that, but they began to learn the language that is associated with that creek. And they learned the songs and the stories of their people from all those elders that many of you have talked about this morning. Most importantly, they began to grow and to learn and to feel and to resurface their sense of responsibility, their sense of responsibility as humans to the health and the care of the water, the fish, the plants, the air, the trees, and each other. These young people, many of them I see now, are leaders in the communities and that’s what they learned. The other piece of this story that is really really important is that many of those young people worked and were invited to work, to study, and to do research in the science labs at UVic.

It is an important role for the university to recognize the intelligence, the ability, and the curiosity of these young people and to support them. That’s what is needed to create the leaders that we need today and it was that partnership that made a huge difference. I also see it in many other areas. The work that all of you are participating in with this project and with the leadership of Nick and Maeve and many of you, that’s what you make possible. Bringing our knowledge to what we learn is important to regenerating what is here that sustains us. I just want to end by saying that what you’re working on, when you work together to do this kind of work, is making a prophecy happen that came before the settlers came. That there would be a time when an opening for Indigenous knowledge would come, for the knowledge of the land and of the people. We can find that in the resurgence of the languages, because it’s in those languages, the voice of the land, that we learn and we will remember what we need to keep ourselves going. As humans, we’re totally dependent on the land, the water, the plants, the fish, the animals, and the air. So all the best with the work that you’re doing and thank you again for inviting me to participate and to say a few words.” 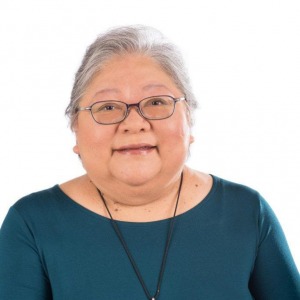 Professor Emerita of Indigenous Education, Curriculum and Instruction at the University of Victoria and Canada Research Chair in Education and Linguistics
Living Lab Project

Dr. Lorna Wanosts’a7 Williams is Professor Emerita of Indigenous Education, Curriculum and Instruction at the University of Victoria and Canada Research Chair in Education and Linguistics. She built her career on the principle that quality education for Indigenous children must be characterized by strong cultural teachings alongside a Euro-Western education.

At the University of Victoria, Dr. Williams initiated and led the development of Bachelor’s and Master’s degrees in Indigenous Language Revitalization, and a Master’s in Counseling in Indigenous Communities. She also initiated, designed, and implemented a mandatory course in Indigenous Education for all teacher education students, leading to the same requirement for all teacher education programs in British Columbia. She coedited with Gloria Snively a two book resource called Knowing Home: Braiding Indigenous Science with Western Science. (2016).

She served as past Chair of First Peoples Cultural Council, currently serves as Chair of First Peoples Cultural Foundation. Throughout her career Dr Williams has held a number of senior positions in Education such as the director of the Indigenous Enhancements Branch of the Ministry of Education and Indigenous Education specialist for the Vancouver School Board.  Lorna was part of the team in that designed the writing system for Lil’wat and co-authored the first curriculum and learning resources for teachers to teach the language in school. These materials continue to be used to teach today. She currently serves as the Elder/member of the Ministers Advisory Council on Indigenous Women, Member of the Indigenous Circle for SSHRC. She was inducted into the Order of BC in 1993; the Order of Canada, Officer in 2019; Indspire Award 2017 all for her work in Indigenous Education and languages.